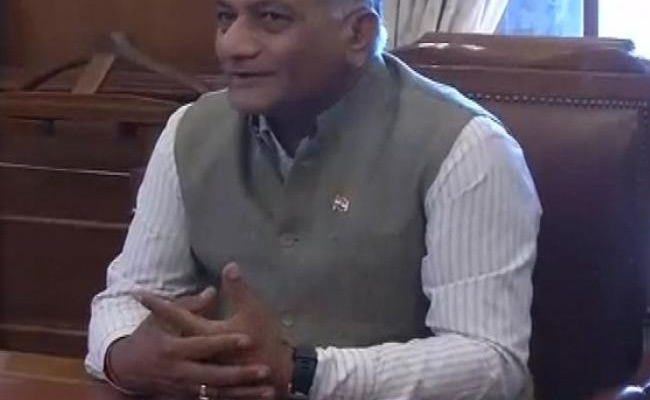 New Delhi: Upping the ante against Union Minister VK Singh for his controversial remark, the Aam Aadmi Party on Friday filed complaint against him at Prasad Nagar Police Station in national capital.

AAP leader Ashutosh said that VK singh apologised due to political reasons only after HAM chief Jitan Ram Manjhi demanded. “VK Singh has insulted Dalits and he should be arrested under the SC/ST Act. The Additional Commissioner of Police has assured us that they will conduct an investigation and VK Singh will be questioned,” said Ashutosh.

The Oposition is demanding the ouster of the former Army Chief for his dog remarks. Commenting on the burning alive of two children near Faridabad in Haryana, Singh said Central government has nothing to do with it.

“This incident has nothing to with the Central government. This is the failure of state government. If someone throws stones at a dog, the government is not responsible,” he said. Singh also said that the whole incident is a case of personal enmity.

General VK Singh has in the past too, faced the ire for his controversial statements.

Two children of a Dalit family were burnt alive and their parents suffered injuries allegedly after some persons from upper caste set their house afire while they were sleeping. The shocking incident occurred at around 2.30 AM on Tuesday at Sunped village on the outskirts of Delhi.

Four people have been arrested in connection with the case on the basis of preliminary investigation. Three policemen have also been suspended for dereliction of duty.

Vaibhav, who was two-and-a-half years old, and his sister, 11-month-old Divya, died after the attackers allegedly poured petrol from the window and set the house ablaze while the family was sleeping inside. A religious programme was being held nearby in the village at that time.

Their mother Rekha, 28, suffered serious burns and has been referred to Delhi for treatment while their father Jitender, 31, too suffered injuries while trying to save his family.