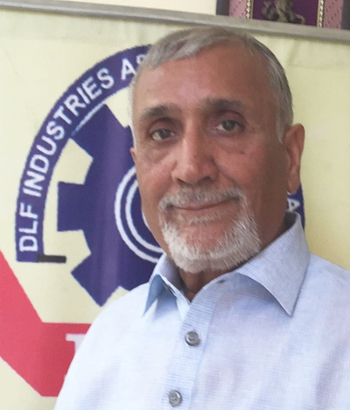 Faridabad(Standard news/manoj bhardwaj) DLF Industries Association expresses its gratefulness and thanks to Sh. Vipul Goel, Industry Minister Haryana for the prompt action and resolve to upgrade the infrastructure of DLF Industries Association and make it a world class Industrial Area. As a first approach, Detailed Project Report has been prepared and was discussed on 7 april amongst the Team DLF of S/Sh. J.P. Malhotra, T.C. Dhawan, Sri Ram Aggarwal, Kuldeep Singh and HSIIDC consultants S/Sh. S.K. Singhal, S.K. Bhatti, S.K. Verma and Ram Bhaj of KY Consultants.During the meeting DLF opined that Horticulture Development work of 3 Parks may be taken up with provision for boundary walls, lighting, joggers track, benches and other equipments and Mast Light and 3 canopies. Replacement of Sewage pipeline which is 40 years old and small in size also needs to be taken up. This is an old pipe and will not be possible to clean and declog it.Textile Printing & Dyeing Units cannot be permitted to throw untreated chemical processed water into the sewer.The HSIIDC Team and DLF surveyed some of the area to get a first hand idea of vacant plot near A-18 at present unauthorizedly occupied.DLF Industries Association is satisfied with the work being taken up and request Industry Minister that New DLF may be regularized and taken over by MCF so that infrastructure provision and upgradation of that area is also taken up simultaneously.