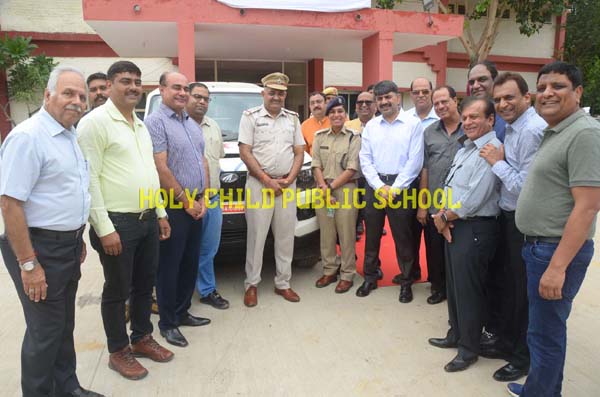 fia handed over a scorpio to the cp police

MANOJ BHARDWAJ
FARIDABADF( STANDARD NEWS ON LINE NEWS PORTAL)In a special function organized at Police Station Mujesar today, Faridabad Industries Association handed over a Scorpio Car to the Police Commissionerate. The Car key were received by the DCP NIT Smt. Nikita Gahlot in the presence of Shri Amitabh Singh Dhillon, IPS, Commissioner of Police and Shri Vikram Kapoor, IPS, DCP (HQ). Among the industrialists, present were, Shri Sunil Gulati, Shri Manmohan Garg, Deputy Mayor, MCF, Shri Sukhdev Singh, Shri Gunjan Lakhani, Shri B R Bhatia etc.Immediately on arrival of the Commissioner of Police, all the dignitaries planted trees in the Police Station premises. Thereafter speaking on the occasion, Commissioner of Police thanked FIA and its members for having donated the car which will further improve the efficiency of the Thana. He also urged, the Police Personnel that they should listen to the problem of any complainant and gets sensitized with his problem. Mr. Manmohan Garg, Deputy Mayor stated that FIA and other industrialists is always be forthcoming to help the Police Commissionerate to request that the Policemen should develop an attitude of helping the complainants who come to visit the Thana.