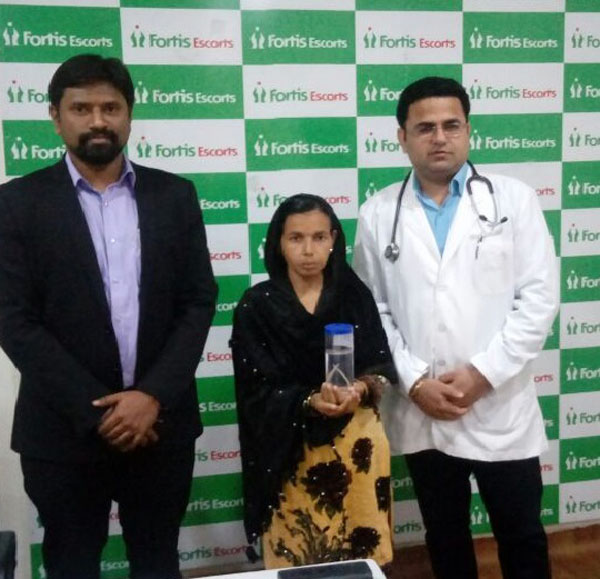 Faridabad(standard news on line news portal/manoj bhardwaj)…Timely diagnosis and treatment saved the patient from multi-organ failure. Thirty year old Akbari was rushed to Fortis Hospital Faridabad when she began suffering from excruciating abdominal pain coupled with intermittent bouts of vomiting. Akbari hadto undergoan emergency ultrasound which revealed that she was suffering from severe pancreatitis.Post an endoscopic retrograde cholangiopancreatography (x – ray of the bile and pancreatic ducts)it was diagnosed that her common bile duct had been infected by a 15 cm long round worm. A team of doctors led by Dr. mitMiglani, Senior Consultant, Gastroenterology at Fortis Escorts Hospital, Faridabad performed life –saving endoscopy on the patient. Akbari case was fraught with complications as the worm had completely lodged itself in the common bile duct, making the excretion process of the worm extremely difficult. The doctors opted for an endoscopic approach, using specialized instruments and general anesthesia. This was in stark contrast to the traditional approach which would have resulted in a lengthy open surgery. Had the surgery been delayed any further, the pancreatitis would have worsened and resulted in multi stage organ failure. The surgery was successful and the patient was discharged the very next day. Dr. Amit Miglani said, “With the advancement of technology, newer endoscopes and finer endoscopic instruments various procedures are being done with ease. These minimally invasive procedures reduce the hospital stay of the patient, the risk of post-operative infections and complications.Patient Akbari said, “I was so weak and fragile I had completely lost my appetite and I was in pain. I couldn’t describe how listless I was. I did not know what was wrong with me. All I knew was that the pain was blinding. Now after treatment I am feeling much better and have realized the importance of food hygiene and healthy eating. Dr. Miglani also said, “Such cases are usually prevalent in lower socio economic groups because there is an absence of proper hygiene practices. However in most of cases the worms tend to grow in the small intestines and can be easily removed by administering de – worming medication in both children and adults. In cases which do require surgical intervention, our doctors are comfortable with the latest technologies and therefore ensure minimum discomfort to the patients. Mr. HardeepSingh, Facility Director, Fortis Escorts Hospital, Faridabad said “Fortis Escort is equipped with the latest of technology and best of clinical expertise in the region. We have taken up several such clinical challenges in the past and turned them around. Round worms, hook worms and whip worms are parasites which are transmitted to humans via the soil. These impair the nutritional status by causing internal bleeding (which can lead to loss of iron and anaemia), intestinal inflammation and obstruction, diarrhoea and impairment of nutrient intake, digestion and absorption. Good hygiene& sanitation) are the best ways to avoid roundworm infections.