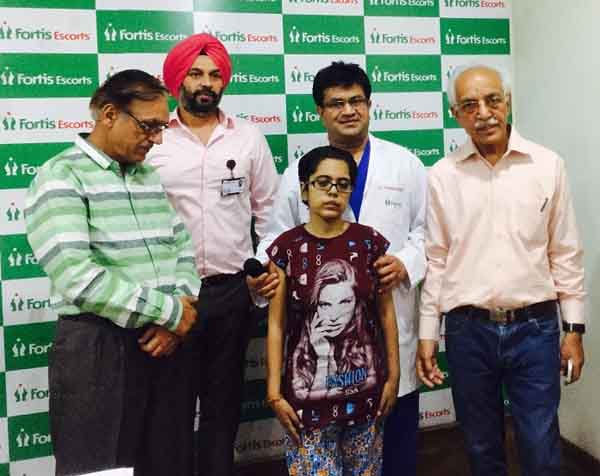 Faridabad(standard news/ manoj bhardwaj..)Doctors at Fortis Escorts, Faridabad recently performed a high risk surgery on a 25-year-old thalassemia major patient with a history of multiple transfusions, who had suffered a fractured spine leaving her two lower limbs paralysed. The surgery was conducted successfully with the patient recovering well and walking independently. The team was led by Dr Ashish Gupta, Additional Director, Department of Neuro Surgery & Spine and Dr V P Choudhury, Senior Consultant, Haematology, Fortis Escorts Hospital, Faridabad.
The patient was rushed to hospital with excruciating back pain after a fall in the bathroom. She was unable to move her lower limbs and initial tests proved that the power in her lower limbs was 0/5 i.e. paralysis. A bone mineral density confirmed the patient was suffering from osteoporosis. Further examinations, X- ray and MRI scan of the spine revealed compression fracture at D12# or a collapse of the vertebra, in this case, due to trauma and vertebral weakening due to osteoporosis. The MRI also showed extra medullary hematopois with expansion of vertebral body and canal stenosis. Dr Ashish Gupta, Additional Director, Department of Neuro Surgery & Spine said, “The main challenge in conducting complex surgeries on thalassemia patients include anaemia due to low haemoglobin and multiple transfusions. This makes administering anaesthesia difficult. This patient was also suffering from osteoporosis which made her bones fragile. It is tough to insert and hold the spinal implant with sufficient support and conduct decompression of the spine in such a condition. Post consultations, the team decided on surgery using a conservative approach since very few such cases have been reported so far. The methodology aimed at surgical decompression and fixation/fusion for spine stabilization & early rehabilitation. The patient was kept under comprehensive ICU care – IV steroids and analgesics with Vit D and calcium supplements, physiotherapy of the limbs, lower back, bowel and bladder care for three days. The post-operative period saw the patient improving both neurologically and symptomatically. The power in both limbs improved to 3/5 and she became relatively pain-free. Mohit Singh, Facility Director, FEHF shared,“This was an extremely complex procedure which required a careful consideration and skilled clinical expertise. This was facilitated by state of the art technology, infrastructure and trained medical personnel who are able to effectively complement the surgical team’s work. FEHF has often taken on cases which seem extremely challenging or where patients and their families have given up, and turned them around, staying true to their endeavor to give their best to the patient. According to the National Health Portal of India, thalassemia is a disease of the blood in which there is increased destruction (hemolysis) of the red cells. There are various severities of the disease from thalassemia major, the severe form in which the patient needs regular blood transfusions in order to survive, to thalassemia minor, an asymptomatic carrier state with patients of thalassemia intermedia in between, Patients with thalassemia are more prone to heart problems, infections, anaemia, slow growth rates and bone deformities. Thalassemia’s are inherited disorders, that is, they are passed from parents to children through genes. People who inherit the defective haemoglobin genes from one parent but normal genes from the other are called carriers. Carriers often have no signs of illness other than mild anaemia, but carry the defective gene. The WHO states that thalassemia can be controlled cost-effectively through programmes that integrate treatment with carrier detection and genetic counselling.