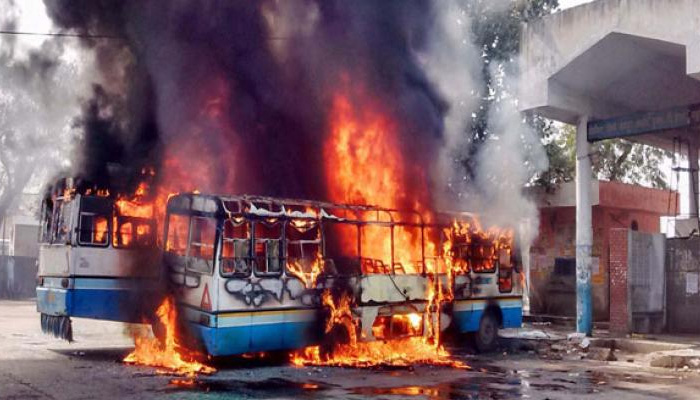 Chandigarh: A probe panel investigating incidents that occurred during the recent Jat agitation for reservation in Haryana has blamed senior state officers for failing to perform their duty.

As per a report in The Indian Express, the Prakash Singh panel has found that senior officers, including of police, delegated powers to their juniors during the agitation in February that led to wide-scale violence and arson.

Many other officers failed to take a timely note of the warnings issued by the Centre, the panel stated.

The daily, which has accessed the preliminary findings of the panel, said some 3,000 witnesses have testified before the committee.

As per the findings, many top bureaucrats and police officers had panicked when the agitation turned violent.

The panel will reportedly write in its final report that senior officers “shirked away” from their responsibilities. It will also throw spotlight on several questionable decisions taken during the agitation.

In one such example, Jhajjar district SP Sumit Kumar was summoned to Sonepat on February 19 evening by the then Rohtak IGP Shrikant Jadhav.

After Kumar left Jhajjar with his men, the district was run over by protesters who indulged in large-scale violence.

The panel also noted the IGP’s absence from Rohtak during February 20-21.

The panel mentions in its report, which is in the final stages of preparation, that the “specific inputs” sent by the Centre to the state on the likely breach of the Munak canal in Sonepat, which supplies water to Delhi, were not acted upon in time by a senior IAS officer posted in Sonepat. This led to the canal being eventually damaged by protesters on February 20.

In another observation, the panel mentions about a wireless message sent by a senior police officer to his subordinates asking them to hide arms and ammunition, lying in police stations, at “safe locations” before the Jat mobs could come and take them away.