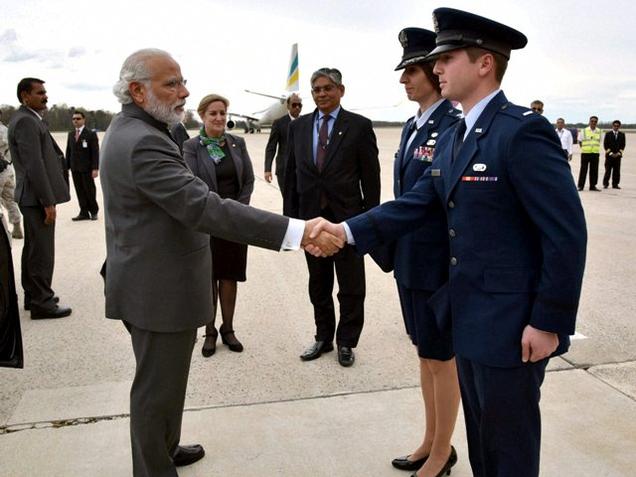 Modi to visit U.S in June, likely to address Congress

The agenda is still being worked out, but his itinerary will, in all likelihood, include an address to the joint session of Congress.

Prime Minister Narendra Modi will travel to the US for a bilateral summit with President Barack Obama in June, most likely on June 7th and 8th. The agenda is still being worked out, but his itinerary will, in all likelihood, include an address to the joint session of Congress.

Ocean economy, space cooperation, cyber security and nuclear commerce are the likely issues that the top leaders will discuss, but there is no finality yet on the dates or the agenda, an official of the U.S State Department told The Hindu.

Mr Modi may also visit the National Aeronautics and Space Administration (NASA) during his visit and some new initiatives are likely to be announced during the visit.

A commercial agreement between Westinghouse Electric and the Nuclear Power Corporation of India Ltd to build six nuclear reactors in Gujarat could also be finalised during the PM’s visit. This deal was expected to be signed during Mr Modi’s visit recently for the Nuclear Security Summit.

The State Department official said there were still some scheduling details to be worked out, as several senior officials would be travelling to China for the Strategic and Commercial Dialogue in the first week of June.

Mr. Obama invited Mr. Modi for a bilateral summit when they both met briefly during the Nuclear Security Summit, officials said. Some internal deliberations took place within the Indian diplomatic establishment before it was decided that Mr Modi would undertake the visit. U.S’s continuing support for Pakistan, including the recent decision to give it more F 16 fighter jets, remains an irritant in bilateral relations. India and U.S are also locked in some disputes at the WTO.

“This will be President Obama’s way of saying that he cares for India. There have been unresolved issues, but President Obama clearly values relations with India and hosting PM Modi for a bilateral summit is a clear indication of that,” said Mukesh Aghi, President of the US-India Business Council.

“We hope Prime Minister Modi will accept our invitation to address a joint session of Congress. During his earlier visits the schedules could not match. This time it looks possible,” Mr Holding told the The Hindu.

“…we ask that you invite Prime Minister Modi to address a Joint Meeting of Congress….This renewed partnership has found champions in the leadership of both parties, including both President Clinton and President George W Bush, and has been further emboldened in the United States by a strong, proud, and growing Indian-American Diaspora,” the Congressmen said. “Our two countries have signed a defence framework agreement to increase military cooperation and the civilian nuclear agreement, signed in 2008, will result in the construction of nuclear power plants in India,” they added.

Mr Modi’s visit in June could turn out to be the last substantive interaction between the two leaders before Mr Obama demits office early next year. An address to the U.S Congress and a state banquet in his honour will make up for the absence of grandeur in Mr Modi’s three earlier visits to the U.S. Despite the fact these are last months of Mr Obama in office, there are expectations of tangible outcomes too.

“There are a few key areas where we may see “deliverables” during the summit. First, there remains a dangerous gap between our high-level views on global economic issues, particularly trade. While a leaders summit may not be able to bridge the divide over issues at the World Trade Organization, or develop a roadmap to induct India into a trade grouping, it offers another chance for our leaders to re-dedicate themselves to make real progress on our long-stalled negotiations over a Bilateral Investment Treaty (BIT). We may also see the first project agreement for civilian nuclear power development. A third tangible deliverable may be the signing of our Logistics Exchange Memorandum of Understanding (LEMOA), for which there was “in principle” agreement during Defense Secretary Ashton Carter’s recent visit to India,” said Richard M. Rossow, Wadhwani Chair in U.S. India Policy Studies at the Center for Strategic and International Studies.