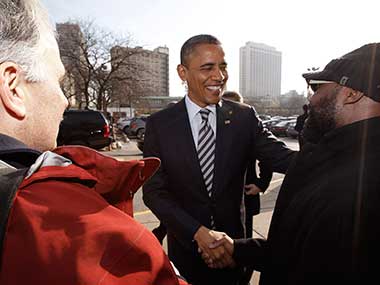 Washington: US President Barack Obama is following the American presidential elections “pretty closely” as he has a stake in who succeeds him at the White House, a top official has said.

“I think it’s fair to say the President is following the election pretty closely. He obviously has a stake in who will succeed him in office,” White House Press Secretary Josh Earnest told reporters at his daily news conference on Tuesday. “He certainly is following the course of the broader debate that’s taking place on both sides. And at some point, the President will have an opportunity to be a much more active participant in that debate. That will be when we shift to the general election,” Earnest said.

He reiterated that some of the rhetoric coming from the campaign trail tops the discussion when Obama meets world leaders.

“The kind of question that the President gives in those settings is the same kind of answer that he’s given publicly when asked that question. I think the President makes this point in the interview as well – the President doesn’t just get this question from people overseas,” Earnest said.

“This is the kind of question that’s on the mind of Americans across the country right now as well. And I don’t think there are any easy answers to it,” he said.

He said that the reason Obama raises it in the context of interview is because he is asked about it.

“Given all of the built-in advantages that we have got an economy that’s the envy of the world, we’ve got a military that is stronger than any other military in the history of the planet, we have a society and a culture that other countries and other cultures and other populations find remarkably attractive – that gives us a lot of influence around the world,” Earnest said.

“All those are good things. The question is, where is the source of our potential downfall? The argument that the President has made on a number of occasions, publicly and privately, both at home and overseas, is that our greatest risk – or the significant risk here, given that dynamic, lies within the dysfunction of our politics,” he said.

“We need to continue to demonstrate an ability to manage all those advantages and preserve that edge,” he added.